How to ride on a local bus in Bangkok

There are many local bus lines in Bangkok. It’s useful for you to be able to use the local bus which take you to your destination for cheap. You may think it’s difficult to ride on the local bus but actually it’s easy. I’ll offer information on how to ride the local bus in Bangkok with pictures and maps.

This local bus is non air-conditioned. You can find it easily because windows are open. Bus number, 71 , ห้วยขวาง(Huai Khwang) and คลองเตย(Khlong Toei) are displayed.

This bus is the oldest type without air conditioner.

The scheduled buses are safety because the buses run on fixed route. You never be taken out of the route. Cheap fare is fine. You can enjoy local view with local people so I often ride on the bus.

Some buses display destinations in English but many buses in only Thai. Especially if you don’t read Thai it would be difficult to recognize destinations and a route. What should we do?

For example, when you want to go to Khlong Lat Mayom Floating Market find it on a map. Next find the nearest bus stop.

Then tap the bus stop icon. Scheduled buses are displayed as below. Next tap number 146ร and resize it.

You can see the route as below, a loop line.

Next find a bus stop to ride on the bus. For example, a bus stop in front of MRT Lak Song station is as below.

Tap the bus stop icon. 146ร bus is running surely. Ride on the bus and get the destination.

As well, when you want to go to Wat Mahabut find it on the map at first.

Next find the nearest bus stop.

Then tap the bus stop icon. Scheduled buses are displayed as below. Next tap number 519 and resize the map.

You can see the route as below.

This bus runs from Sathon to Minburi, long distance.

Tap the bus stop icon. 519 bus is running surely. Ride on the bus and get the destination.

How to get on a bus is as below.

When a bus you want to get on comes, the bus often stops but sometimes go through if you don’t appeal to the bus driver. Especially when you are alone at a bus stop appeal to a bus driver as putting your hand side.

After you pay the fare the conductor hand you a ticket as below. It’s important. Sometimes a ticket inspector checks your ticket.

When a bus arrives at your destination put a button to sound buzzer.

A bus map as below used to be selling. It’s very convenient and easy to find bus routes. I still use the map. When you find the map in a secondhand bookstore, get it.

Enjoy local buses in Bangkok! Have a safe and cheap local bus trip!

-未分類
-Bangkok, How to ride on, Local bus 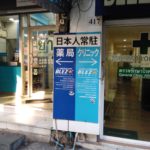 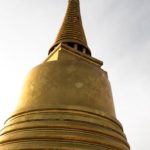 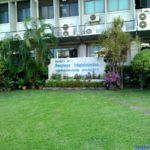 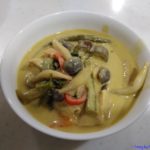 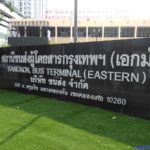 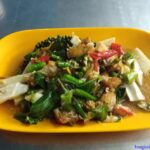 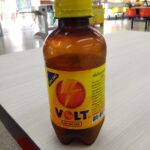 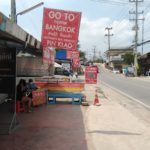 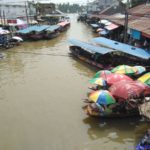 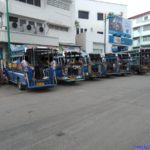